THE INVISIBLE BOX BY MELINDA ELGOT

Six days before Naomi passed away, Victor and I gathered our other little ones around the table to share our feelings and tell them that Naomi would soon die. We wanted to again ask them about their preference for involvement in her end stages of life, and include them in the process as much as we were able. They both asked if they could please be with her when she passed and then my beautiful boy asked if he could give her a present to take to heaven with her. I asked him what he would like to give, and he said a colouring book.

“I thank my God every time I remember you.”
Philippians 1:3

Shepherding little hearts and minds is so tough, and I felt it very important to make sure they were aware that nothing physical could be taken from this earth, so we began to discuss what sort of things she could take with her when she left us. There was mention of love, hugs, prayers and the like, but then an idea came to me. There was a peace that entered my mind as the emotions in the room swelled and my heart rolled down my cheeks. They need to have something to give. So out of my mouth tumbled these words; “Should we make Naomi an invisible box full of all of her favourite things?” The question only hung for seconds in the air before it was answered with a resounding “Yes” from both our kids. So, at that table, full of sadness and questions, four hearts and eight hands fashioned an invisible box.

The invisible box: we gave it sides and a bottom, making sure we all knew where we needed to place the treasures we would send with her. Then the fun began. We took turns making some of her favourite things to be sure she would have them in heaven. DJ offered a colouring book and forever-sharp pencil crayons. Phoebe made sushi and coloured her a picture. We all laughed and joy burst through as we filled the box with all we could dream would bring a smile to her face. It was filled to the brim with gifts of every kind, as we blew kisses and squeezed as much love in as we could. The sweetness of my almost five-year-old princess brushing imaginary tears from her cheeks in to the box was enough to cause my husband and I to pause, hands clasped in an offering of thanks as we watched our children pour their love into their sister.

We were about to seal the box when we came to a sudden stop. We had neglected to include Puppy. He is a well-loved, well-travelled stuffed dog of Naomi’s and they were inseparable. So with trembling hands, I sewed a body, each hand around the table taking a turn to “fill” him with stuffing, and then we gently sewed him shut. DJ “made” a collar to match the predecessor and we all lowered him in to the box filled with hope. As we sealed it with kisses and hugs my heart burst with love, not only for the child clinging to life in our room, or the two sitting full of life and joy before me, but for the husband that sat beside me, breaking the waves of the storm. We four carried that invisible box quietly up the stairs as not to wake our dearly loved, and we placed it under the bed, knowing we could send it with her when she slipped from this world.

Six days later, when Naomi breathed her last breath, Daniel and Phoebe knelt beside her bed, pulled out the box, kissed her gently and gave her the most precious gift they had to give. The invisible box filled with the love, born from the family she was blessed with and that was blessed with her. To this day they talk of what they “sent with their big sister” to heaven, and with it the knowing that they showed her she was loved. And those moments, and those memories, though some may sting, are some of those I count most precious. 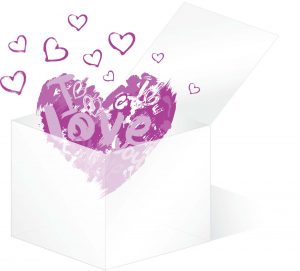 RETURN TO STORIES OF DEEP LOSS