A shunt is a tube, placed in by a neurosurgeon, that allows the fluid to flow through it. A valve regulates the flow of the fluid. Most shunts are used to divert cerebrospinal fluid from one location to another. Mostly, shunts have three pieces: a proximal catheter, a valve mechanism (the bump under the skin on the head that may be located at the top or back of the head) and a distal catheter. The neurosurgeons at the Stollery are very experienced with shunts. It is important to avoid constipation with shunts, as it increases the pressure in the abdomen, making it difficult to drain CSF from the brain. 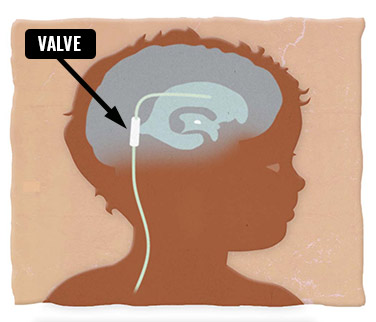 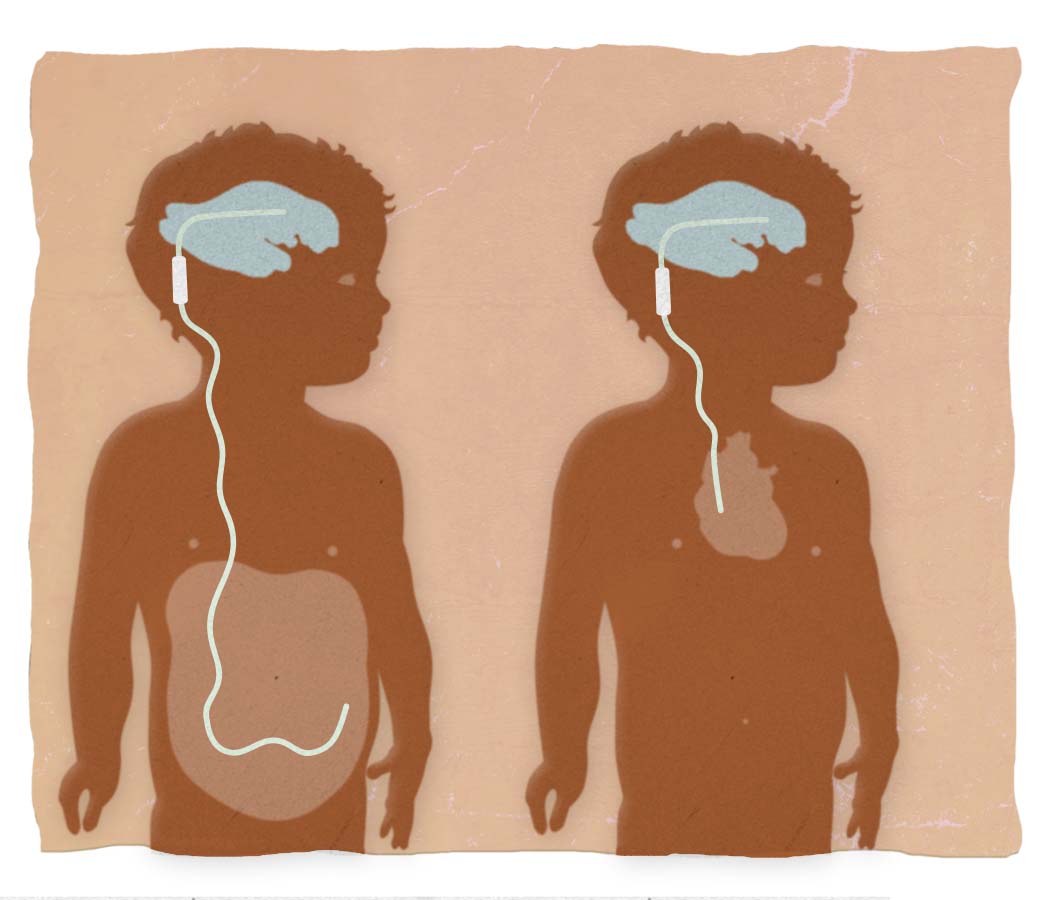 GOOD TO KNOW: If the shunt is placed in the lumbar area of the spine, the bump from the valve will be on the back next to the spine.
If your child has a programmable shunt, a neurosurgeon may need to reprogram it after the MRI is complete. An MRI machine uses a magnetic field, which may change the setting of your child’s shunt. NEw programmable valves are being developed so that reprogramming is not necessary after an MRI scan.
Children with programmable shunts should stay away from strong magnets. Toys like Thomas the Train have very weak magnets and are okay, but there are many strong magnetic devices on the market to avoid.

Tests and scans used for shunts

What are they looking at?

Here is the picture of a normal brain MRI.

In the middle of the brain you’ll see a darkened thin shape that resembles bat wings. This is the ventricle system of the brain.

Now, look at the views below that show hydrocephalus on a CT, MRI and fast head MRI (FISP scan or fast head). In hydrocephalus, you can see how the ventricles (bat wings) are much bigger than in a normal brain, and now resemble a butterfly.

Doctors will compare older and new CT or MRI films to assess if the ventricles are remaining stable in size or if they have changed. This information, along with your child’s symptoms, allows the neurosurgical team to know if there is a problem with the functioning of the shunt. 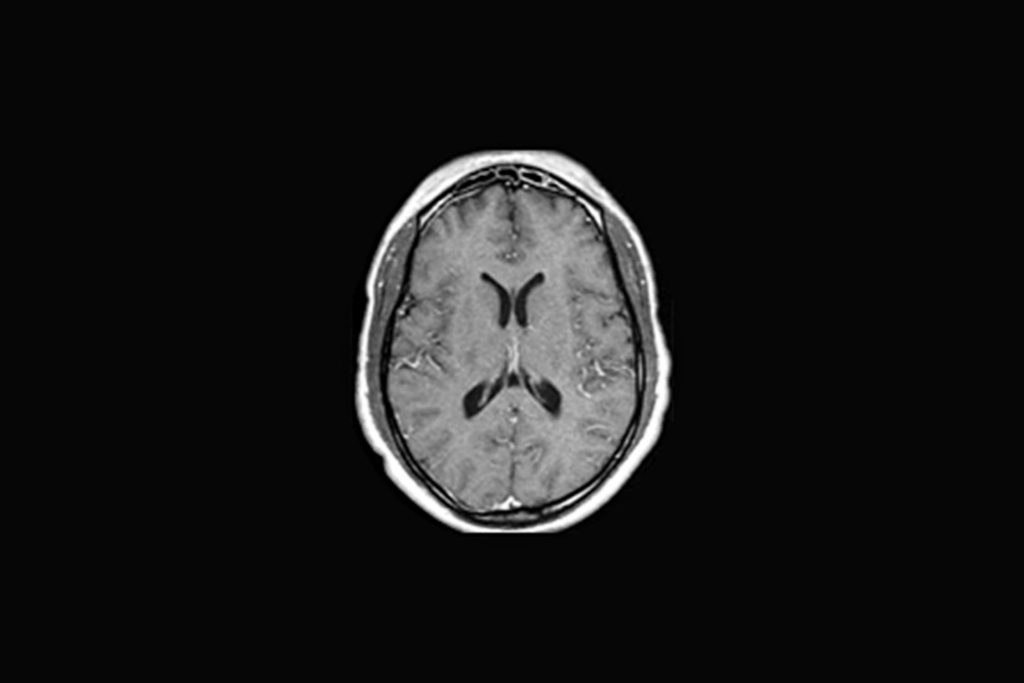 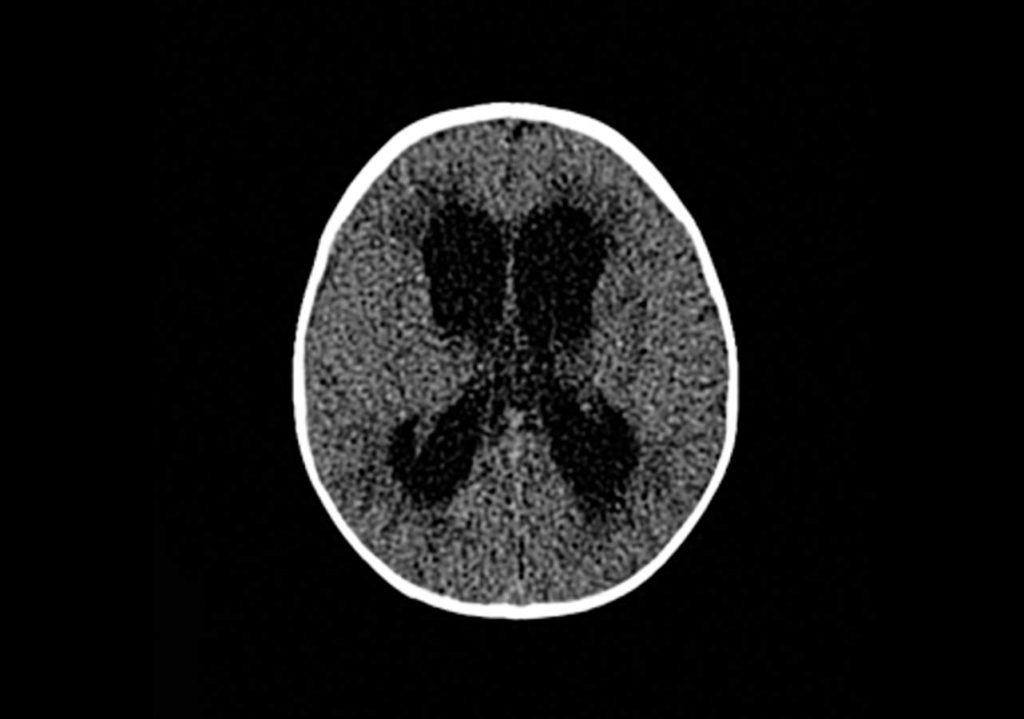 Hydrocephalus on a CT 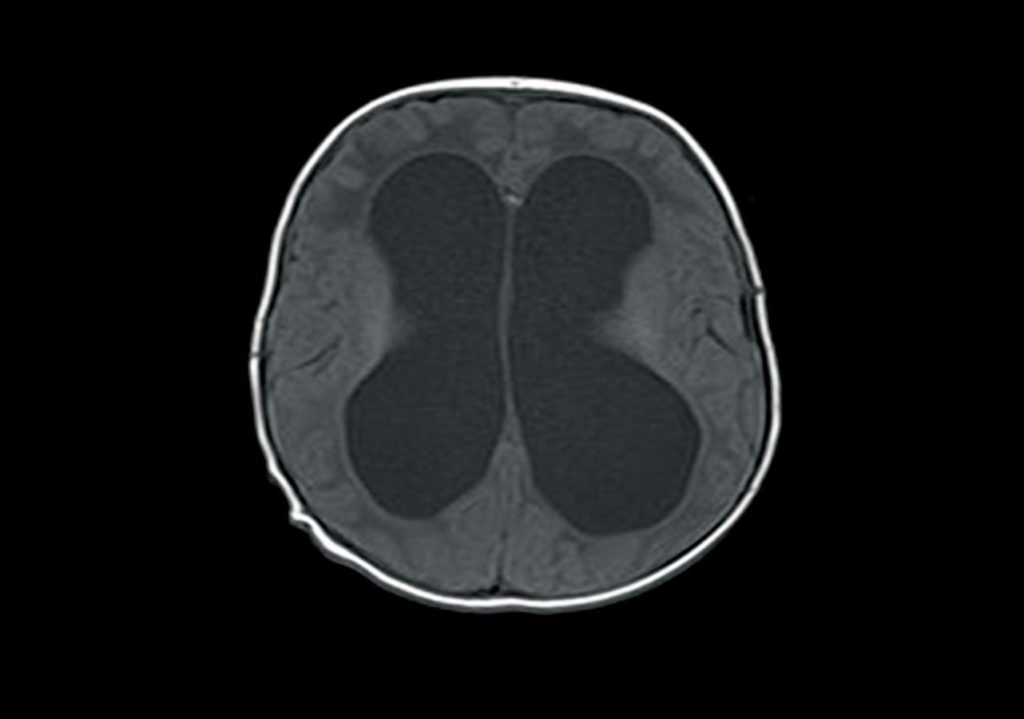 Hydrocephalus on a MRI 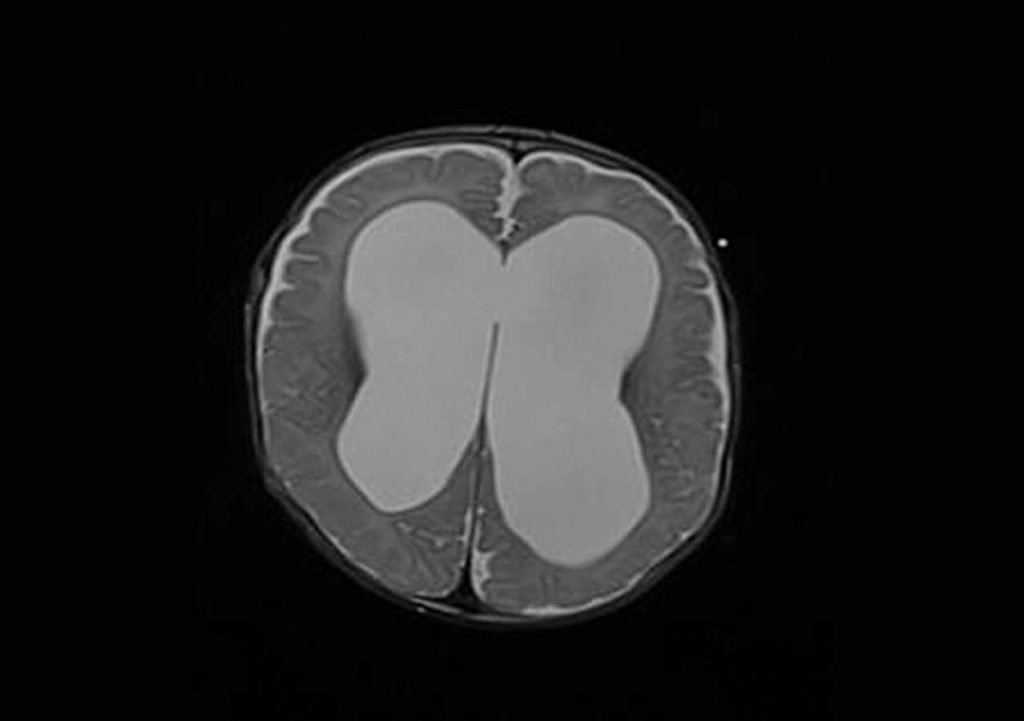 Hydrocephalus on a FISP sequence

GOOD TO KNOW: Neither kind of MRI has radiation.

Most shunt valves have a small dome or bulb reservoir (this is the bump you see under the skin) designed to sample CSF by inserting a small needle under sterile procedure by a neurosurgeon or NP. This procedure is done to relieve pressure in urgent situations or to test for infection.

The Stollery’s neurosurgery team identified some signs and symptoms of shunt malfunction or infection to watch for:

You may be hesitant to seek medical attention out of fear that you are overreacting to your child’s symptoms. Children with shunts can get sick very quickly, so it’s better to be safe than sorry. This may result in some ER visits where they are seen, assessed and sent home with the assurance that everything is fine. By having your child assessed properly when symptomatic, when your child’s shunt fails they will receive the life-saving, prompt medical attention they require.

TIP: A simple way to prevent shunt infections is to cut your child’s fingernails! Children will often scratch at their shunts and, if the scratch is deep enough, their shunt can get infected.

This is an example of a ventricular catheter (shunt) that has failed due to the in-growth of the choroid plexus, which is like the “seaweed” of the brain that creates the cerebrospinal fluid. It can plug the catheter and prevent CSF from entering and draining. 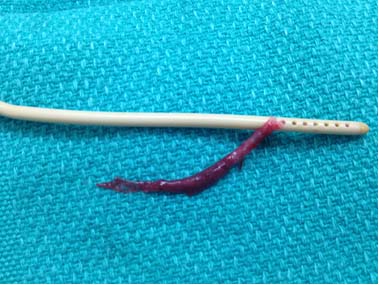 Signs and symptoms after a shunt insertion or revision

After a shunt operation, you need to watch for infection or shunt malfunction. Seek medical help if you notice any of the following:

Use a chart like this one to record information about your child’s shunt: the date of surgery or change, the kind of shunt it is, and the setting on the shunt.