Let’s be honest – most of us have never really thought about the brain and spinal cord, except for the fact that we have one and we need to protect it. When your child or loved one is diagnosed with a neurological condition that may require neurosurgical intervention, it is helpful to understand the structure and functioning of the brain and spinal cord.

In this section we have included an overview of the anatomy of the brain and spinal cord, along with a few diagrams to help you see what it looks like. A glossary of terms can be found here. 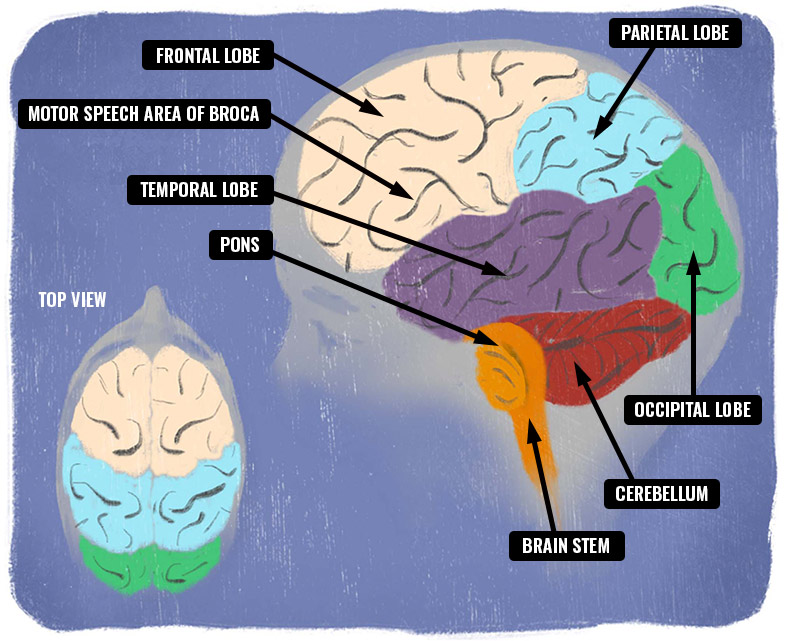 The brain sits inside the skull and is surrounded by a watery fluid called cerebral spinal fluid (CSF) that provides nutrients to the brain and cushioning for protection. There are two sides to the brain: the left hemisphere and the right hemisphere. The hemispheres are responsible for different things.

Corpus callosum is the part of the brain that allows the right and left hemisphere to communicate with each other.

The cerebrum is the largest part of the brain and has two hemispheres (left and right). The cerebrum is extremely important as it interprets sensory input from all body parts and controls body movements. The cerebrum is responsible for movement, learning, emotions, reasoning and memory. There are four lobes that make up the cerebrum: frontal, temporal, parietal and occipital lobes. It is important to note that the movement on one side of the body is controlled by the opposite side of brain. (For example, your right arm and right leg movement is controlled by left side of your brain.)

The Four Lobes of the Brain

The parietal lobes help us understand and interpret information from our senses of taste, temperature, pain and touch. This area also works with handwriting, math skills, language and body position. The parietal lobe is located behind the frontal lobe.

The temporal lobes are located in the temple area. This part of the brain helps us understand what we are hearing by processing information for speech
and language.

There are special doctors at the Stollery called neuro-ophthalmologists or ophthalmologists who can assess the health of the eyes and the optic nerves. If you are scheduled for an appointment, prepare to be there for a while. The detailed examination can be lengthy, so bring extra toys and supplies.

A bike helmet should fit properly over the forehead above the brow.
It should not be pushed back. Protect your frontal lobe!

OTHER PARTS Of the brain

The cerebellum is at the base and the back of the brain. It is responsible for coordination, balance and motor functions such as limb and trunk movement, eye movement and speech. The cerebellum also has input into behavioural portions of the brain.

The hypothalamus is located deep within the brain and is responsible for hunger, thirst and body temperature. The hypothalamus also drives the pituitary gland to release hormones to keep the endocrine system working correctly.

The amygdala is grey matter in the medial temporal lobe and is important for emotional responses. It is part of the limbic system.

The hippocampus is important for long-term memory. It is also part of the limbic system like the amygdala and is often targeted when treating seizures surgically.

The thalamus is a deep area of the brain that relays both sensory and motor activity.