A Chiari malformation is a neuroanatomical condition that involves the area of the brain closest to the spinal cord. This part of the brain (the cerebellar tonsils, which are not the tonsils in the throat) descends into the neck area. The cerebellar tonsils normally reside within the cranial cavity. In children if the tonsils are more than five millimetres into the spinal canal then a radiologist may report that your child has a Chiari malformation. It is important to remember that the doctors will also look at the base of the skull to see if the base of the skull looks tight and if the bones are developed correctly.

Different malformations are numbered from one to four. The variations in terminology depend on if the tonsils are the only part of the brain to move into the cervical spinal canal. In some of the other subtypes other parts of the cerebellum (vermis), fourth ventricle, or brainstem migrate into a lower position. Excess water can collect within the spinal cord, or the bones at the craniocervical junction can be abnormal, resulting in a complex Chiari malformation.

What are the symptoms of Chiari malformation?

Most Chiari malformations are asymptomatic.

To find out if the Chiari malformation is symptomatic in your child, the physician will ask specific questions and examine for certain abnormalities.

If your child needs surgery for his/her Chiari malformation, surgical techniques vary. If there is no problem with the top compartment of the brain or the spinal system, then the neurosurgeon will focus on the base of the skull and top of the spine. The principle of the surgery is to decompress the cranio-cervical junction to take any pressure off the back of the brain and allow normal cerebrospinal fluid dynamics to take place. 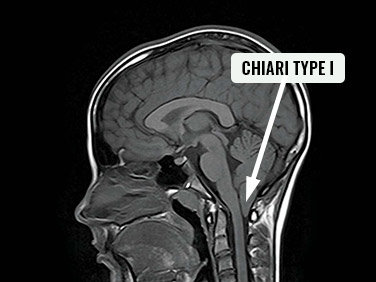 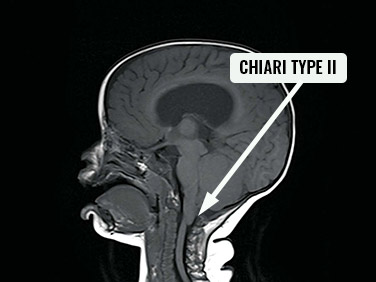