MY LITTLE GIRL BY BY WILL MCCARTNEY

In memory of our precious daughter, Katelyn Marie McCartney
May 23, 2013 – May 31, 2013
Forever remembered, forever missed 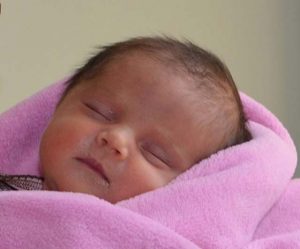 Our daughter Katelyn had a total of two brain surgeries, both on the same day. The first filled with so much hope, the second with so much fear. Katelyn had been diagnosed at 30 weeks in utero with a major bleed in her brain. The next seven weeks leading up to her birth were full of ultrasounds and difficult conversations with neurosurgeons and neurologists. Up until then I didn’t know there was a difference between a neurologist and a neurosurgeon. They told us that Katelyn would live, that she would likely need a shunt put in to keep the pressure off the good side of her brain – a “minor” neurosurgery. She would have problems with the right side of her body and her ability to learn would be significantly affected.

I started making plans. There is someone in the U.S. whose son has cerebral palsy and is quadriplegic. The father swims, bikes and runs though an entire ironman all while carrying his adult son. That was going to be me. I was going to do everything physically possible to give my daughter the best life I possibly could. Yet the fear of the unknown remained.

What multiplied my sorrow a thousand times was watching my wife go through this all and being totally unable to change any of it for her. At that point in our lives I was working and she had been staying at home with our other two kids. We both knew without saying it that she would shoulder most of the burden of caring for Katelyn, along with most of the emotional burden as well. Within a week of learning about Katelyn’s condition I had to go back to work, to be thankfully distracted by the day to day and the needs of a busy career. My wife was carrying this tiny, sacred little combination of us both, feeling her kick all the time, being constantly reminded of the ironic mix of beauty and fear that lie ahead.

I would come home from work and almost immediately feel guilty for having been away for the day, to give the fear a back seat for a few hours, while instead my wife had been bearing the constant reminder all day. I was brought to tears more than once just thinking about what my wife was going through.

On May 23, 2013, Katelyn was born and was doing very well. Based on a MRI, the neurosurgeons highly recommended the shunt. This first surgery held such hope – she was looking great and had exceeded the expectations of doctors. The fear of the unknown found us only a few hours after this surgery as her head swelled and she nearly died right there in the NICU. A second emergency surgery was done. I will never forget looking at the permission form and bursting into tears when I read the word “craniotomy.”

On May 31, we lost Katelyn. The weight was unbearable, like a crushing stone of a hundred emotions. While it may have been heavy for me, for my wife it was even more so. The loss of Katelyn was so much more physical for her, having just given birth, than it was for me.

I took nearly four months off work to take care of my wife and kids, and myself. It was one of the best decisions I have ever made as it helped us to begin healing as a family, and took the load of daily life off my wife, at least for a while. There will always be emptiness in our lives, something missing without her here. For myself, I look at my own death in a different way. With any luck I will have a long healthy life, and when I do leave this earth I know I will on my way to see Katelyn again.

RETURN TO STORIES OF DEEP LOSS